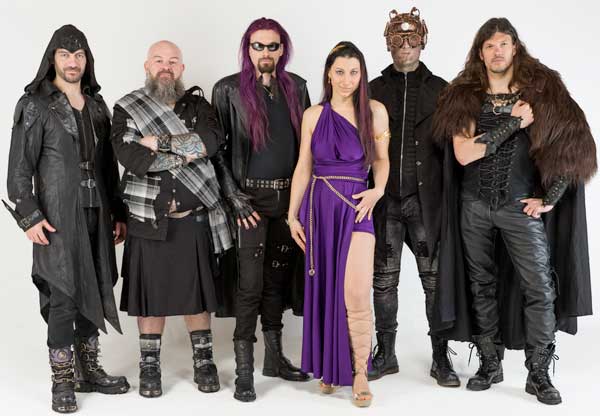 ALBUM INFOS
“Rest In Phantasy“, sometimes also referred to as “RIP“, is the debut album of DREAMSLAVE and just like with any first opus, you can both recognize the influences of other bands as well as the band’s own identity.
Eclecticism both in terms of the music as well in terms of the lyrics is the band’s signature.
Thus, DREAMSLAVE have managed to create their own universe.
“Rest In Phantasy“ is a bit like a collection of short stories: Each piece has its own originality but is also part of the bigger picture. The album reflects this search for both diversity and harmony.
The lyrics of „Masquerade“ are influenced by the movie „Blade“, those of „Pirate’s Anthem“ by „Pirates Of The Caribbean“, while „The Vinland Saga“ approaches a more historical aspect.
„End Of Innocence“ and „Eternitears“ are much more intimate pieces, though. „Wishes Of Revenge“ is full of fantastic and Eastern tales, while „Torments“ and „Angel Requiem“ are built around Mozart’s well-known themes „Dies Irae“ from „Requiem“ and „Queen Of The Night“ from “The Magic Flute”.
„Doomsday“ flirts with the religious aspect of redemption, and „The Dark Crusade“ leads the listener into an epic and mystical world such as those created byTolkien.
The musical influences are very diverse, ranging from classical music to electronic music and even more traditional influences, such as oriental or Celtic music. There are no limits.
„Rest In Phantasy“ is a powerful album, written with heart and soul, an emotional journey into the beauty, from the darkest passions to the bright light of hope… with a little purple touch.