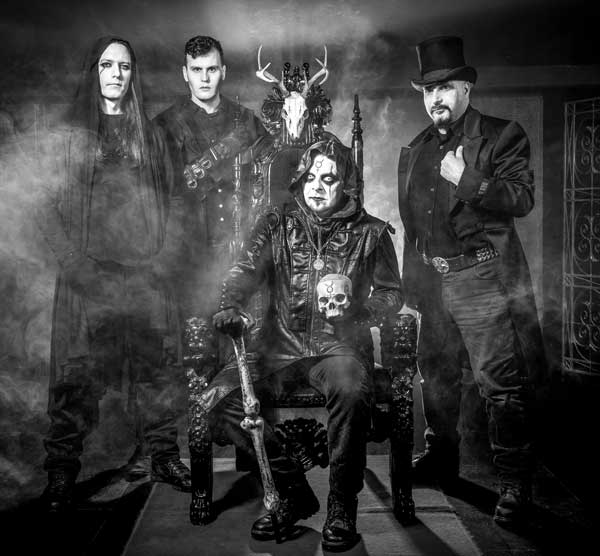 ALBUM INFO
THE HERETIC ORDER made progress on „Evil Rising“ – compared to the debut „All Hail The Order“ (2015) – both regarding song composing and lyrical content, with topics ranging from the occult, prophecies and death to factual historical events:
„Evil Rising“ or „Hate Is Born“ will delight you with its catchy choruses. „Forest Of The Impale“ tells the story of the Romanian prince Vlad III. and the macabre tale of the Forest of the Impaled that made the Turkish army quake in fear. The epic more than 9-minutes-long „The Scourge Of God“ is a song about the dark, infamous tale of Gilles de Rais‘ passing. „Straight Down (To Hell)“ is inspired by the First Council of Nicaea, which molded the Christian bible to fit the political agendas. And the beautiful dark „Visions“ deals with the question of what happens after death… Reincarnation?
„Evil Rising“ is surely the rise of THE HERETIC ORDER!

BAND BIOGRAPHY
THE HERETIC ORDER is a classic/occult metal band for the modern age. Influenced by horror stories both fictional and factual, and with their love for bands such as Black Sabbath, Judas Priest and Mercyful Fate, they have come up with their own niche, which incorporates theatrics with searing riffs and blistering solos to enhance their pagan and occult philosophies since their inception in late 2014.
After having signed a three-album deal with Massacre Records in early 2018, thus remaining true to the label, THE HERETIC ORDER are preparing to release their eagerly awaited second album „Evil Rising“ on June 22, 2018. It will be the successor to the debut „All Hail The Order“ (2015, Massacre Records), which garnered great reviews throughout the UK and Europe.
Confirmed as main support to US metallers Pist.On during their comeback UK tour for June 2018, THE HERETIC ORDER have never shirked the opportunity to spread their music: They have played several major UK metal festivals and countless gigs across the country over the past few years. Alongside Hammerfest 2018, Bloodstock Open Air 2014/2016, Mammothfest 2016 and HRH Metal 2017, they have supported metal legends Exodus, Diamond Head, and Wolf. Expanding their campaign of horror to Europe, the band completed their first international tour in 2017, supporting I Am Morbid (featuring former Morbid Angel vocalist David Vincent), and made festival appearances at Metal Lorca 2016 and Tajuña Rock Fest 2017.
After numerous live gigs in the last two years, the band has morphed into a more technical and heavier metal monster – you can decide for yourself if metal is still alive!
The next chapter is about to be written – now is the time to heed the malevolent word and join THE HERETIC ORDER!