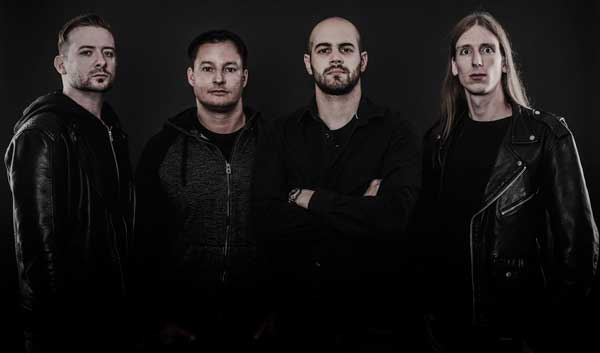 Stories Of A War Long Forgotten

ALBUM INFO
“Stories Of A War Long Forgotten“ is the band’s first ever concept album. It’s about a war being unleashed on earth to punish us for our sins (“Ich Bin Krieg“).
The war spreads everywhere in all its dimensions und triggers a mystic battle between heaven and hell, but also a battle of every individual against itself, against the brutalization of society or against addictions.
The title track sums up all facets, as a war that has long been forgotten (“War Long Forgotten“). The album ends with the conclusion that things that seem to be long forgotten are what destroy us in the end and describes the reckoning of war incarnate (“Vom Letzten Tag“).
Sky Van Hoff (Rammstein, Kreator, Caliban) produced, mixed and mastered the album at The Barracks Studios in Ratingen, Germany.
On the album’s 12 tracks, HOPELEZZ showcases itself on an impressive new level. They never sounded more mature, the choruses have never been catchier, and the guitars have never been more melodic than on their new album. Their mix of brutal metal and pressing melodies instantly grabs the listener by the throat.
For the first time ever, HOPELEZZ have included two songs performed in German on an album. Their urge to create something diverse is fulfilled with a cover version of Bonnie Tyler’s classic “Holding Out For A Hero“.

BAND BIOGRAPHY
Two-times Emergenza band contest winners HOPELEZZ are one of the most exciting and hard-working newcomer bands in Germany! Word about their energetic live shows soon got around, leading to the chance to support bands like Sepultura, Soilwork and Ill Nino.
The debut album “Black Souls Arrive“ was released in 2012. The single “Devils Ride“ reached #1 at Amazon’s Download Charts. The music video for the song was also on heavy rotation at the music-related TV channel iMusic1.
The fan base grew even larger thanks to a tour supporting Ektomorf as well as festival and club shows supporting Lamb Of God, August Burns Red, Eskimo Callboy, Whitechapel and many more.
The second album, “Sent To Destroy“, followed in 2016 and was praised by the press and fans alike. The album was supported with an European tour with The Unguided as well as a tour with Six Feet Under. For the first time, HOPELEZZ also successfully played several headliner shows.
In 2018, you will see the band supporting Soulfly, Hatebreed and Suffocation, among others.
This is how HOPELEZZ describe their style: Imagine Robb Flynn (Machine Head) being raised in the Ruhrpott (the Ruhr area in Germany) in the 80’s and founding a band with his pal Matt Heafy (Trivium).
HOPELEZZ’s principle: No compromises, no rules, no comparisons – risk everything!