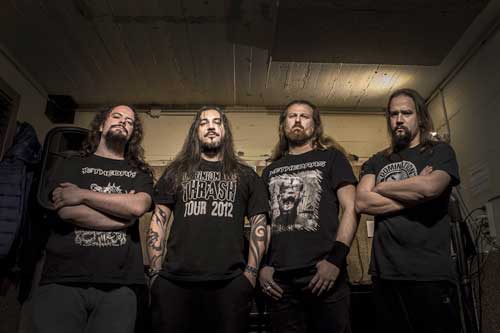 ALBUM INFO
This album is the first one with new guitarist Dani, who took care of all new songs and is an artist with a diverse musical background himself. This also had an impact on how they composed their music. And while keeping their thrash/death trademark, METHEDRAS also added new shades to their music, which was something completely new for the band.
The lyrics on the album are inspired by life itself, seen through the band’s cynic and empty eyes, especially in response to today’s society.
Having recently reunited with their vocalist Claude, „The Ventriloquist“ feels like rebirth to METHEDRAS. They’re steering towards new musical shores, which are possibly even more modern, obsessive and direct than in the past, while keeping true to their roots, but with a broader inspiration and new sound elements.
You can look forward to harsh riffs, killer solos, overwhelming bass and drum sounds and dynamic, growling and infernal vocals. You haven’t heard METHEDRAS like this before!