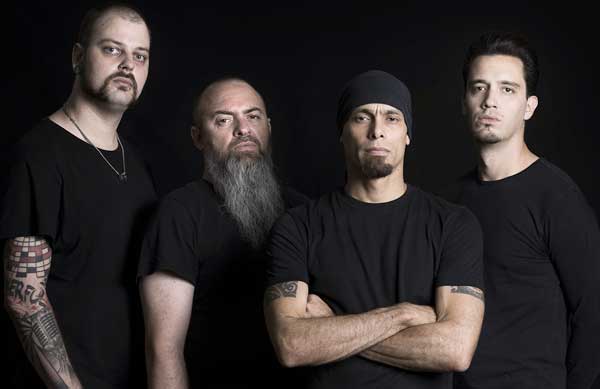 ALBUM INFO
SEITA’s „Maledictus Mundi“ combines elements of death, thrash, hardcore, and groove metal, to form a sound of bone-crushing terror not many bands can rival!
In a time where downright anger-driven metal seems to be a kind of rarity, „Maledictus Mundi“ predicates itself on this wrath and indignation, often directed at the injustices of society.
The songs are played with high emotional intensity and conviction. From heavy grooves to machine gun blast beats, „Maledictus Mundi“ is a visceral, frantic trip that takes you to a realm of pure heaviness!
Whether it’s in the up tempo „Cowards To The Lions“ or the hammer beat down in „Burn The Skies“, low tuning and sharp razor riffs create the perfect backdrop for the intense vocals, full of undeniable rage and brutal honesty!
„Maledictus Mundi“ is faster, heavier and darker than previous releases, and is, undoubtedly, a big step forward in the evolution of SEITA’s sound.

BAND BIOGRAPHY
Inspired by the different faces of human struggle, SEITA’s music, with its brutal and unapologetic force, is the product and outcome of life in a dysfunctional post-truth-world.
Formed in Amsterdam in 2007, SEITA presented their first six tracks as a band in the 2008 self-released MCD „Imprint Forever“. After a successful run of underground gigs, SEITA next recorded and released their debut album entitled „Asymmetric Warfare“ (March 23, 2012), in co-operation with SAOL/cmm (DE). Mixing/Mastering was in the capable hands of Daniel Bergstrand and Rickard Sporrong (Dugout Productions), known for their work with Meshuggah, Behemoth, Soilwork, In Flames and Decapitated.
Since their debut release, the band has continued to play a steady stream of live shows, supporting acts such as Sepultura, Six Feet Under, Soulfly, Hatebreed, Suffocation, Pestilence and Decrepit Birth, among others. SEITA has also performed at various festivals over the years, including Zwarte Cross Festival (Netherlands), Metal Bash Open Air (Germany), Dongducheon Rock Festival, Asia Metal Festival, Trendkill Extreme Feast (South Korea), and the Barge To Hell Metal Cruise (USA).
In 2018, SEITA signed with Massacre Records (Germany)